Being a tester means entering a weird world,

DISCLAIMER: if a fellow tester reads this post, she could feel offended. DON'T.
Read it with irony and self criticism. I write thinking of me, in primis, and I'm not offended because I have been, in turn, everything I've written. Consider it a chance to laugh a bit with yourself.

A while ago, in Isabell's Ravelry group the moderators asked us if we wanted to be in the testing pool. I said to myself, why not?

Pros are:
1. you feel obliged to BO a project in a determined time. This means you consume a huge amount of stash (hurray), a lot more than if  you were let by yourself and it means a lot more sweaters done. I'm at a point where I buy sweaters only if they are knitted in ultrathin yarn (which I wouldn't knit even under torture).
2. if you're noisey, you'll have a preview of patterns that you would have bought anyway.
3.you don't pay for said pattern. You'll not go bankrupt for a pattern purchase but it's still quite satisfying.
4. you can decide if you want to join the test or not, there are no obligations. Even if the guilt of refusing a test eats you alive 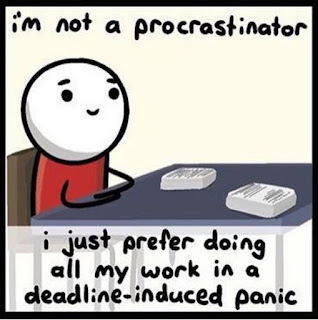 1. the deadline-anxiety nibbles at you for all the duration of the test.
2. It there's an error in the pattern and you don't notice it, there's a fat chance it will be pointed out AFTER you've knitted past it. Andt that's not nice, believe me.
3. often the tests are secret. This forces you to stay silent and endure your friends teasing about how "you're doing nothing". it's a bit annoying if you're in the middle of point 1... and worse if the point 1 is a direct consequence of point 2 and you're unraveling half a sweater or 300sts of seamed BO.
4. you feel obliged to agree to a test even if you have already 200 wips or requests and you fear that, if you refuse, they won't write to you anymore (and you like doing tests). The point 1 begins to nibble at you because you know that you have to finish in time but you have too many other wips.
5. as a consequence of the previous point,there's the anxiety you get when you become aware that there actually was another test and you weren't called. you begin trying to convince yourself you're victim of statistics but fear that you've deluded for the last time.

When you read this list, you ask yourself why do I still do tests...

You want an answer? I don't have one! One that hasn't to be censored, at least.

When I'll have it, I'll write about it a post, so I'll have something to write.
Well, perhaps is simply because it's fun.

There are different kind of tester:

1. The Professional
These are warmachines.
They take the pattern, have already the yarn ready, begin knitting and without missing a step, in two weeks have knitted a XXL that fits perfectly, modeled it and wonder if they should knit another one,  In the meantime you're hitting your head on a sharp corner because you're in full point Con 1 derived from 2 (and that probably was only in your lousy M size) or drowning in deadlines because you quite stupidly agreed to do 2 tests at the same time (but the other one was an headband... MISTAKE).

3. The Normals
These one are the boring one. They already have the wool (or they order it and it arrives in the right time), get gauge, knit without great fuss, post regularly photos, finish in time and send cute modeled photos. these are the most... luckily, for otherwise it would be a mess...

4. The Miraculous
These are the ones whom happens always something unexpected that seems like a disaster. The wool doesn't arrive, the dog chews their needles, they get a burning pink eye that makes them blind for three weeks... but in the end the finish in time, post modeled pictures and all is right WITHIN THE DEADLINE. Grrrr

5. The Messy
I think these ones are included like the disabled persons at work (In Italy, the law says that over a certain amount of workers,  in a working place, there must be a percentage of persons with disability). The law (which one, I have no idea, but there must be one) says it... or they are simply pitied.
There's always something that doesn't work, the wool doesn't arrive (and it really doesn't), they run out of it or the photos are something that not even a 3-years old child would produce with a camera covered in bacon.... or they just never meet the deadline.

6. The Creative
This is a group that, like the messy ones, you don't understand why is always included in the tests.
There are the ones that want to join the test... with something else.
"Oh, what a nice striped and cropped sweater with raglan sleeves... I'll knit it with a lace pattern, long and set in sleeves because I like it best. Oh, and it will be a CARDIGAN".
They want to knit another thing, completely different...

7. The Phantoms
This testers join, receive the pattern, say which yarn they'll choose and disappear. IN the end they post a photo (often not modeled), write down the yardage and annotations and are done.
If there's an error they see, they point it out but otherwise they never ever get involved in the lovely chit chat that it a great part of a test.
When you say ESSENTIAL.

Everyone of us tester did fit in at least one of this category, in her life as a tester, because you know that a test is always an adventure.

And perhaps this is the charme that makes you check eagerly the mailbox everytime a sneak-peek of something is posted in the instagram pages of the designers.

Pubblicato da Thy a 12:12 Nessun commento:

Pubblicato da Thy a 11:39 Nessun commento: